Home » Investing » Top Investors » TSX Investors: How to Easily Identify and Profit on Stocks That Will be Fundamentally Strong Post a Joe Biden Win

TSX Investors: How to Easily Identify and Profit on Stocks That Will be Fundamentally Strong Post a Joe Biden Win 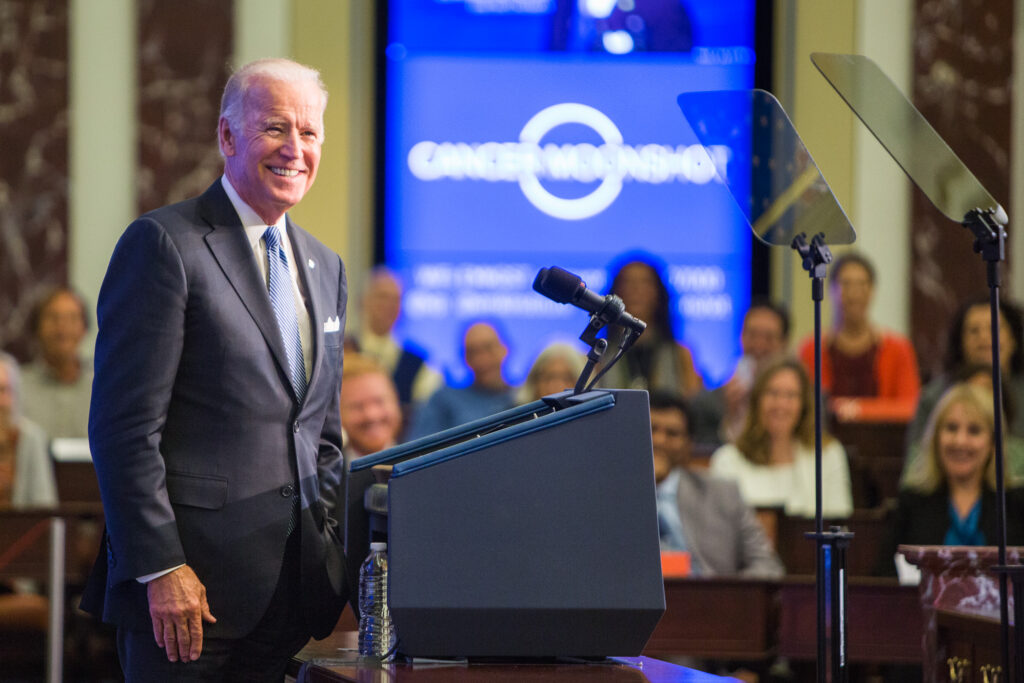 Joe Biden is all set to take over the presidency from Donald Trump in January 2021. However, while Joe Biden might have beaten Donald Trump, it is likely that he will preside over a divided house. Major policy decisions are going to be difficult to pass but there are still plenty of opportunities for investors to make good money. There are certain sectors and certain companies within those sectors that will stand to benefit as a result of Biden’s policies.

Let's take a look at some of the companies that might be well-positioned to outpace the broader market in the next few years.

While it would be unreasonable to expect Biden to completely ignore anti-trust issues with respect to Apple, Google, Facebook, and Amazon, he will certainly not be as antagonistic to China as Trump has been. Big tech will benefit from Biden’s win as he is expected to ease trade wars with China that Donald Trump had aggravated.

Amazon is one of the easiest buys on this list. Like it or not, people are only going to increase the amount of shopping they do online. The COVID-19 pandemic has made sure of that. Bank of America analysts say that the company controls 44% of all online sales in the US with the number two company, Wal-mart controlling 7% of online sales. That’s a huge difference between first and second place.

Amazon’s revenues for the third quarter of 2020 came in at $96.1 billion, net income was $6.3 billion, and earnings per share were $12.37. When you compare this to revenues of $70 billion, net income of $2.1 billion, and earnings per share of $4.23 in Q3 2019, you realize that the pandemic has boosted Amazon’s business more than any other company’s. The number of Amazon Prime users around the world crossed 150 million this year.

Its cloud service platform AWS (Amazon web services) clocked in $11.6 billion in the quarter compared to $10 billion in the previous quarter, and up 29% from 2019.

Whatever Biden thinks about anti-trust issues at Amazon, the fact is that people are not going to stop shopping from the e-commerce website. Amazon’s revenues were $281 billion in 2019, and its earnings are expected to grow at 36.35% per annum for the next five years. The company is expected to hit $572 billion in revenues by 2023.

The stock trades at $3,128 and is projected to reach $3,812 in a year’s time. For a company that is worth $1.57 trillion in market cap, this sort of growth is nothing less than phenomenal.

Nearly half of all Apple’s suppliers are based out of China. Trump’s constant attacks on China and the actions on Tik Tok caused quite a few problems for Apple, with the Chinese government threatening to put the company on an ‘unreliable entity list’.

After Biden’s win, two of Apple’s biggest Taiwanese iPhone assemblers, Foxconn and Pegatron, announced that they are committed to investing in the USA. In 2017, Foxconn had announced that it would build an advanced display plant in Wisconsin but the project has faced multiple delays.

For the first time in its history, Pegatron, that is a supplier to companies like Google and Microsoft as well, announced that it would invest in the US.

"The world's two largest countries both want to build their own supply chains. As long as this trend does not change — and it is unlikely to change — I don't see any changes to our investment in Wisconsin, whether Democrats or Republicans are in power there," said Foxconn Chairman Young Liu at an investor meeting.

To put it simply, Apple will sell more phones under Biden than it would have under Trump. The stock trades at $119 right now.

Joe Biden is keen on building and repairing America’s broken and rapidly aging infrastructure. His ‘Build Back Better’ plan was a key talking point during his campaign. He wants American infrastructure to be modernized and this should not be a tough negotiation even in a divided house. It is hard to see Republicans oppose a plan to invest in infrastructure.

Caterpillar should be a multibagger

If there are massive investments proposed in infrastructure building, you can be sure Caterpillar is going to be a major beneficiary. This $93 billion company is the world’s largest manufacturer of construction equipment.

Caterpillar stock has been hurting ever since the pandemic struck the world and countries went into a lockdown. The second quarter of 2020 was especially horrible as all three segments: Energy and transportation, construction, and resource industries took massive hits. However, the third quarter recovered slightly.

Now, the company has received two pieces of good news. One is the Biden win and the second one is Pfizer’s successful clinical trials on the vaccine. Both of them can act as key drivers for Caterpillar and set up the stock for an extended period of upward trajectory. The third quarter of 2020 showed that nearly 51% of the company’s revenue came from outside North America.

With Biden increasing spending on infrastructure in the US, and the rest of the world starting to get back on track, Caterpillar stock stands to gain substantially.

It might be surprising to see an electric utility on this list but NextEra Energy could very well be the dark horse in the clean energy space when Biden takes over. It is the largest producer of wind and solar energy in the world. It is a dividend aristocrat and has increased its dividend for the last 25 years. The company continues to chug along and its revenue growth has averaged around 7% CAGR in the last decade. These are numbers that are not easy for a company its size to achieve ($151 billion market cap) but it does so with amazing regularity.

KKR has also signed a $1.1bn convertible equity portfolio financing agreement with NextEra Energy Partners for an interest in a 1,125MW portfolio.

As clean energy becomes the norm in the world, companies like NextEra Energy are only going to get stronger.

Telecom is going to be an interesting space to watch for after Biden takes over. While giants like Verizon and AT&T might not get the red carpet treatment from the new administration, there are a couple of lesser-known companies that could see their stock prices zoom.

ViaSat is a satellite broadband communications company. It operates in the commercial and defense spaces. A large part of its business is tied to the airline industry and the last two quarters were expected to have been tough for the company.

While its airline business took a hit thanks to the lockdown and grounding of flights, its government systems segment experienced strong demand with backlog reaching a record of $1.1 billion and a book-to-bill of 1.7x. Consolidated award bookings surpassed the $700 million mark for the second consecutive quarter with a book-to-bill of 1.3x, bringing the backlog to a new record of $2.3 billion.

ViaSat is undervalued by a significant margin. The average target price for the share is $73.83 and the lower end of the target is $42. The stock currently trades at $34.59. That’s a minimum upside of 21.4% and an average upside of over 113% from current levels. This is a stock that is waiting to explode, and smart investors will jump on this opportunity.

Echostar Corporation is another satellite communications provider that reported stellar numbers for the quarter ended September 30, 2020. Analysts expected a loss of $0.1 per share but the company blew them out of the water with earnings of $0.26 per share.

Broadband subscribers for their Hughes brand increased by 38,000 in the quarter to take the total number of subscribers to approximately 1.58 million as of September 30, 2020. Echostar had $2.5 billion in cash and marketable investment securities on September 30, 2020. This is a great war chest to deploy for acquisitions as well as capital expenditure.

The stock is trading at $25.7 and analysts have given it an average target of $43.5, an upside of almost 70% from current levels.

This will help cannabis companies get access to debt capital from banks which will help them expand. However, investors need to keep in mind the fact none of this will happen at least until the second half of 2021. They need to be careful of what stocks to invest in. Two stocks that merit a strong look-in are Curaleaf Holdings and Green Thumb Industries.

Curaleaf is an MSO (multi-state operator) with operations in 23 states and is one of the largest weed producers in the US. Curaleaf currently operates in 23 states with 95 dispensaries, 23 cultivation sites, and over 30 processing sites.

In July, Curaleaf completed the acquisition of Grassroots for $700 million making it the world's largest cannabis company by revenue. On November 5, the company announced the acquisition of Alternative Therapies Group's licensed cultivation and processing operations in Amesbury, Massachusetts. Curaleaf will add 53,600 square feet of capacity to its existing 104,000 square feet capacity in Massachusetts.

Five states including Arizona, South Dakota, New Jersey, and Montana approved cannabis for recreational use recently. Curaleaf has operations in Arizona and New Jersey. NJ in particular means there is a great chance for it to get traction from consumers in New York and Connecticut as well. Curaleaf is a company with growing revenues and a stable business model.

Green Thumb Industries is another MSO that operates across 12 states in the US. The company reported its results for the third quarter of 2020. Revenues increased 31.3% from Q2 2020 and 131.1% from Q3 in 2019. Revenue growth was driven primarily by a 32.6% increase in the sale of Green Thumb’s consumer packaged goods business. Retail revenues increased by 27.9% compared to Q2 2020.

Gross profit was $87 million compared to $32.1 million in the third quarter of 2019. Net income came in at $9.6 million compared to a loss of $14.6 million in the same period in 2019. This is the first time that the company has delivered positive net income, a huge step for Green Thumb. Green Thumb derives two-thirds of its sales from high margin cannabis-infused derivatives, which will help it generate a positive net income consistently.

The company is focused on its expansion on limited license states with large populations. It has opened six stores in 2020, operates a manufacturing facility in Toledo, Ohio, and has a total of 48 stores in the US currently. Analysts predict that the company will hit close to $1billion in revenues by 2022. It is one of the most expensive stocks in the cannabis space but it’s well worth the price.

Big tech stocks need to remain a part of your portfolio as they have crushed peers in the last few decades and will continue to do so in the future as well. The shift to clean energy will be the key drivers for NextEra and peers and the renewables sector will receive investments of billions of dollars to set up a solid infrastructure.

While the cannabis space is at a nascent stage of development and carries certain risks, Curaleaf and Green Thumb have strong fundamentals and should generate multi-fold returns to long-term investors.

This is not a recommendation to buy these stocks but just the author's point of view.